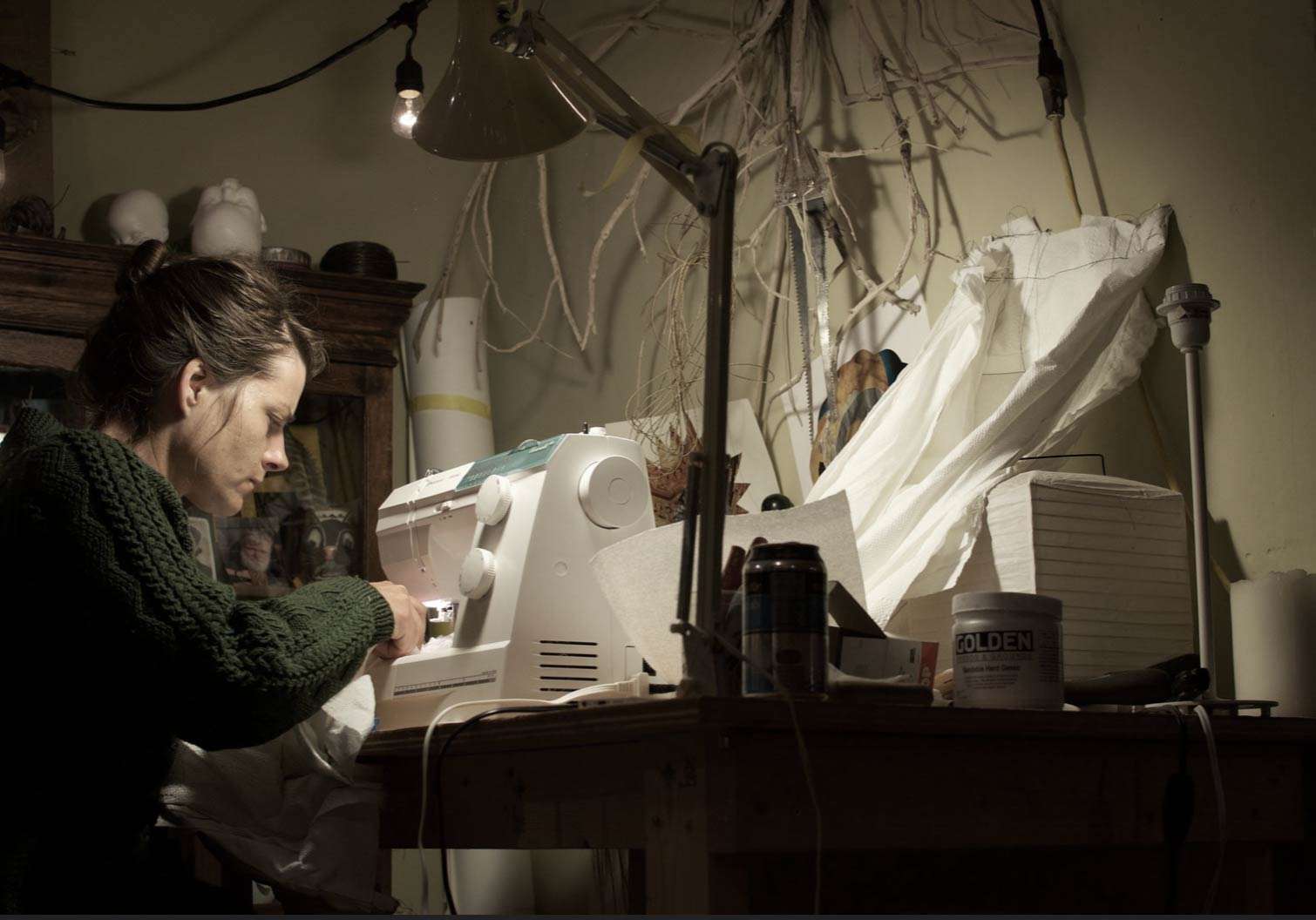 “I remember knowing by age four I was here to work with my hands. This idea was reflected by the regional craft community that surrounded my father. By age nine, this community of craftspeople included people worldwide, and I understood working with one’s hands was universal. Craft became my culture.”

“I am curious about the power of installation art and how it connects to people. I attempt to share and connect to the world around me, using my art to travel to the social sphere to celebrate and interrogate the human condition. I draw upon my personal experience as a medium to tell stories.”

Laura Hosaluk is of Saskatchewan Settler descent. Her ancestry travels back in four directions; Ukraine, Poland, Scotland, England and arrived in a unifying position here upon Treaty 6 and Treaty 4 Territory. Born in 1983 in Saskatoon, Hosaluk had the opportunity to absorb the Arts and Crafts from her father and the many rural and international craftspeople who worked beside him. Craft became Hosaluk’s culture, one that reflected a mutual interrelation (earth-human dynamic) of working with the Earth’s resources with one’s hands to make beautiful things. She is committed to carrying forth these traditions that existed on this land, and many lands, long before her ancestors settled on this prairie.

Hosaluk maintains a studio practice in Saskatoon, Saskatchewan, where she works as a community arts educator, interdisciplinary innovator and dynamic volunteer. Her creative practice spans painting, mixed media, sculpture in ceramic, wood and bronze, land art and more – was formed during her childhood in the rich creative rural craft community that gathered around her father Michael, a craftsperson. Hosaluk’s work is in the permanent collection at the Madison Children’s Museum, WI, USA, Joe Fafard’s private collection, Pense, SK, and SK Arts permanent collection.

Her versatility enables a variety of expression fostered through her early art education at the EMMA International Collaboration, Emma Lake, SK. This is where she was introduced to what she calls a free exchange of knowledge, a self-directed approach to learning. In 1996 Saskatchewan-based artist Michael Hosaluk founded the Emma International Collaboration in Saskatoon, SK. This event brought together some of the World’s finest woodturners and furniture-makers. Over time, this traditional lecture and demonstration event evolved into an innovative, hands-on conference that included various craft disciplines. Every two years, artists from around the World gather in Saskatchewan’s boreal forest for one week at the Emma Lake Kenderdine Campus, hence the name (“Emma”). Laura Hosaluk began her art education in 1996 alongside 100 professional craftspeople, then started her formal apprenticeship training under her father in 2005. She also studied under Al Bakke, Bronze casting, 2005, and Teresa Gagne, Potter, 2005. In 2008, Hosaluk was invited to The Mountain School, Waldorf Centre, Bellevue, ID, USA, as an Arts Intern.

Laura continued her art education by becoming the first female coordinator for Emma in 2010. She championed EMMA’ UNPLUGGED’, a format that encouraged people to move out of their creative comfort zones and challenged participants to re-embrace traditional processes when it came to making. And a mandate for creating a safe, fertile and fun environment for artists at all stages of development to explore materials, techniques and subject matter without expectations to results.

In 2013 she presented her own ideas and experience gathered thru collaborative learning when she was invited to present alongside her father Michael at a conference, Creativity in the World, Haystack Mountain School of Craft, Deer Isle, MN. That same year she presented Creativity in the World at The Donkey Mill Arts Centre, Holualoa, HI, USA, as she was an artist in residence at the Hawaii Artist Collaboration Program. Hosaluk was invited to Wisconsin’s Madison Discovery Museum as a visiting artist. Here she utilized a trampoline as a studio space and constructed paintings on 5’x8′ on plexiglass for their sidewalk surprise gallery. Her work is titled Painting experiment #1: Trampoline. In 2016 she was invited to Massachusetts Institute of Technology, Martin Demaine; Artist in Residence, Glass, and son Erik Demaine; professor of Computer Science to further research ideas and benefits on collaboration as a model for empowering student-centred learning.

As the spontaneous nature of the event continued to grow, so did the father/daughter practice: together, they encouraged one another to be innovative in their art practices as they explored various mediums, techniques, and subject matter. In 2016, the two stepped away from the Emma International Collaboration to continue their learning by attending innovative conferences that reflect back the pair’s vision to remove hierarchy in how we exchange information through innovative educational models: notably, Haystack Mountain School of Craft, Deer Isle, ME, 2013; Hawaii Collaboration, Holualoa, HI, 2013; Stone House Collaboration, Old Man River, AB, 2015 and 2017; and Echo Lake, New Hope, PA, 2018. Hosaluk accredits all the people and hands who have influenced her teaching pedagogy and accredits it back to one verb: sharing. Sharing is equal to teaching. A rare person doesn’t want to own and control artistic ideas and techniques. This is where innovation can start again, and again! The guiding principles that formed EMMA can innovate how we exchange information, representing the future of conferencing and education.

Their mutual passion for collaboration is reflected in the duo’s practice: Hosaluk Art, public sculpture, Bridging Whirls, 2019. Made from a found bridge girder and concrete casting of a large fir wooden slab, this bench creates a literal bridge between nature and humankind as it connects the Elbow River with the people of Calgary. A bench acts as the vehicle for one or more to gather, an opening to belong in the interconnectedness of life, a place to sit in the experience of inner expressions combined with the outer world that surrounds. In the words of Laura, “I believe a creator’s core desire is to create something of enduring value. I’m curious how can the viewer influence the space? How does space influence the viewer? How often do the two exist at once? This installation represents imaginative environments that bridge the conditions to invent creative possibility found in viewing our Earth as truly ours rather than mine.”

During the week-long performance/production, the Hosaluks designed and built an Installation of a public bench onsite, bringing the art practice into the public realm. The pair also brought another project titled Connect to Calgary, 2017. An experiment in furniture making involving live woodturning with a bicycle-powered lathe.

Hosaluk’s work has been exhibited regionally, nationally and internationally. In 2014, Hosaluk’s work was invited into the show, Saskatchewan, curated by Adrian Stimson, which featured works by artists from the Métis, Cree and European peoples of Canada. The Saskatchewan exhibition delved into the immense artistic, cultural and ethnic diversity that has long characterized the region’s art and its strong history and tradition of finding and creating solid artists.

Hosaluk served as the educational manager with the Boys and Girls Clubs of Saskatoon in partnership with the Core Neighbourhood Youth Co-op (CNYC), an alternative education program. The artist’s experience of classroom-based settings and traditional hands-on apprenticeships means she understands the importance of the two distinct learning styles. Her passion centers around delivering creative programming.

Hosaluk’s directly connected to her Saskatoon community. She is passionate about collaboration and learning about Unshared Authorship, both in experiential learning and community growth. In 2008, she was instrumental with Kimbal Worme and Joseph Naytowhow in connecting children with Indigenous culture through a series of after-school programs titled Youth Leading Youth with the City of Saskatoon. Her love for creative learning has been demonstrated through various Artist Residencies; Opening the Door, ArtSmarts Grant, Saskatchewan Arts Board (SAB), Nutana Collegiate, Saskatoon, SK, 2009, Come Circle Around, SAB Creative Partnerships, Explore and Develop, PotashCorp Saskatchewan Children’s Festival, Saskatoon, SK, 2016, and the Think Indigenous Conference, Nutana Collegiate, Saskatoon, SK, 2017, and The Human Loom, a cooperative craft game created with the Functional Life skills students at Evan Hardy Collegiate, Saskatoon, 2018, SK Arts.

Hosaluk’s future goal is to collaborate with new partners who would like to pioneer new educational systems through the arts as creativity is next to literacy. 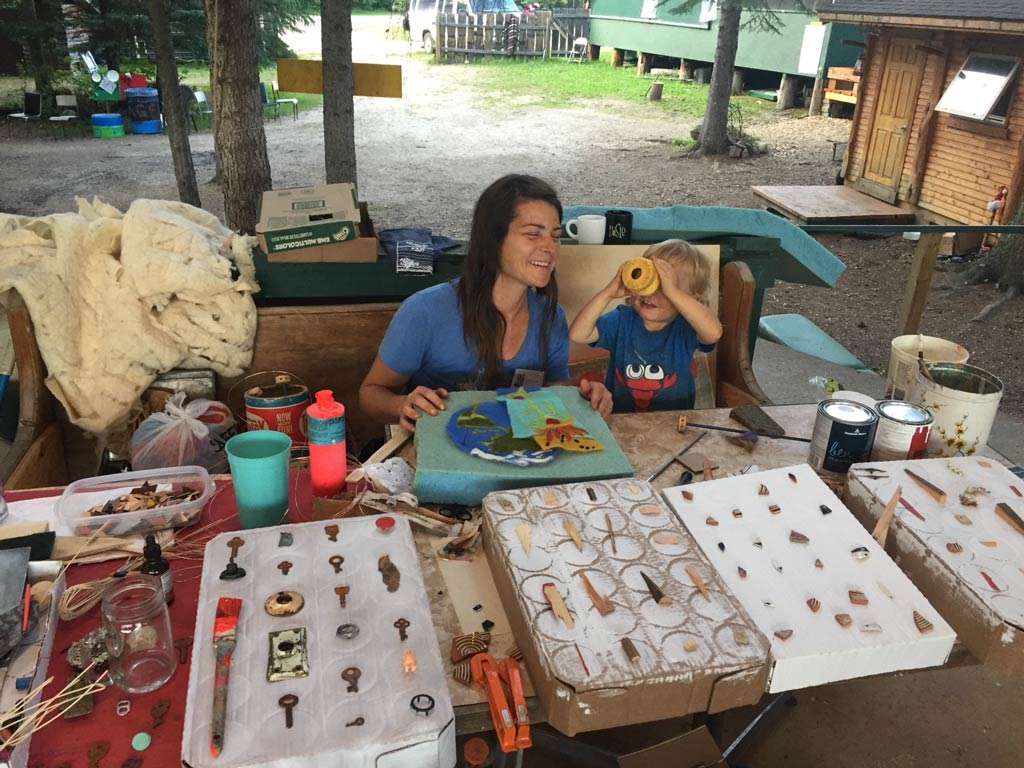